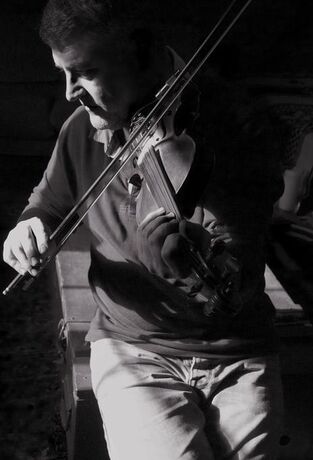 BIOGRAPHY﻿
​
Born in 1971 to Irish parents in Withington, Manchester, Sean grew up amidst an already vibrant traditional Irish music scene fuelled by the Irish that emigrated to the UK in the early fifties and sixties. This diaspora was not confined to the North West of England, but affected every major city in the UK. At work and in the pubs and clubs of Manchester the Irish came together and music played a major part in strengthening these bonds and friendships.

Sean took up the fiddle at the age of thirteen after his (now late) brother Stephen introduced him to an old school friend who was teaching music at the time. After the first week Sean was hooked; and over the next few years he developed a love for traditional Irish music. Manchester at this time was a melting pot of cultures; these were the halcyon days of Manchester's pop rock culture, and the city was literally alive with every kind of music imaginable.

In the early nineties, Sean joined Manchester's Celtic-rock band (Toss The Feathers), teaming up with flautist Michael McGoldrick. Sean was on his musical journey, and over the next few years he toured extensively with the band all over Europe; sometimes doing up to two hundred and fifty gigs a year.

Sean moved to Ireland in 2003 when he joined the renowned Galway singer Sean Keane, recording on his You Got Gold album in 2006. Musically, this was a real stepping stone for Sean, as it afforded him the chance to meet and play with some of his musical heroes.

Since 2008 Sean has been a regular member of the Damien Dempsey Band supporting none other than Bruce Springsteen on his Wrecking Ball Tour in Nolan Park Stadium 2013, Sean recorded fiddle and viola on Damien's, Almighty Love album and is also a member of Sharon Shannon's Band since 2010 recording on Sharon Shannon's latest Sacred Earth Album 2017.

Having played the fiddle for over thirty years, Sean is in high demand for session and live performance in all areas; from traditional Irish music through to Rock. Instantly identifiable for his versatile, sweet fiddle playing and unique sensitivity – that is sometimes hard to find today.

﻿Sean has been lucky enough to have played with some amazing musicians, recording and appearing on stage with many of them including:﻿